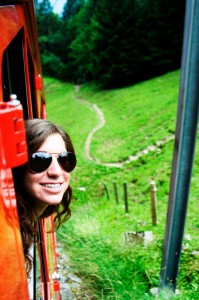 Bio: My father was always a big music aficionado and concertgoer so I was introduced to some of the classics at a very young age.  My sing-a-long vhs’s were chock full of Crosby Stills & Nash, Neil Young, and the Talking Heads. I remember when I was old enough to get a cassette player my parents presented it to me with Whitney Houston’s self-titled album and Billy Joel’s “Piano Man,” which is still my favorite to this day.  My father started taking me to concerts during my last years of middle school and by the time I was in high school we were frequenting the PNC Arts Center for the annual Allman Brothers performance.  I dare say I have followed in my father’s footsteps and have made music a huge part of my life, regularly attending concerts, plays, and my annual trip to Gathering of the Vibes in Bridgeport, Connecticut.
I am so grateful for the large part that music has played in my life thus far and could not imagine living without it.  I am also lucky to have such musically talented friends such as RJ Johnson who plays in several jazz ensembles and Emily Shaw with her wonderful all-girl folk band, Sugar Honey Iced Tea.Although much time and hard work will be spent during the coming years working towards my doctoral degree in clinical psychology, I will always make time to incorporate my love for music in all facets of my life.  I am simply drawn to good music, which serves as a universal medicine. It has the ability to influence positive emotions, interpersonal connections, engagement and motivation to all those who will simply take the time to listen and open their hearts and souls to the musical vibes emanating throughout this world (and perhaps others)!

Favorite Fests: Gathering of the Vibes, Catskill Chill and Osheaga (with Bonaroo a close second).